The tool manufacturer Kirsch in Jena has been a family business since 1965 and supplies renowned customers in the fields of medical technology, precision mechanics and mechanical engineering. In the modern equipped hall in Jena, Germany, a wide variety of services are performed, such as milling, turning or the production of prototypes and special products. Processing stainless steel, aluminum, titanium or steel requires heavy machinery, which takes up a large part of the hall.

When the tool manufacturer decided to modernize the air distribution system, a direct supply of fresh air to the workstations had to be ensured throughout the hall. The challenge was to optimally ventilate even the hard-to-reach work areas between the machines. The air supply had to be constant and optimally directed so that the employees did not feel any unpleasant drafts. This would not be possible by simply distributing air from above – which is why the company opted for FabricAir fabric ducts.

The FabricAir team designed a custom air distribution system that runs around the machines through numerous bends, angles and branches. The three-strand system evenly conditions all areas of the hall, with each strand distributing a volume of air of 14,000 m3/h and with perforations adapted to each area. The air distribution system for the supply air is made of Combi 30 fabric and its dark gray appearance ideally matches the hall conditions. Combi 30 is impermeable, flame retardant and washable. The air guided in the duct has a speed of 5.75 m/s and is discharged at 0.2 m/s by means of MicroFlow™ flowmodel. The low speed solution was done with Combi 20 permeable fabric with OriFlow™ flowmodel, that was selected for the exhaust air, with a directed flow through laser-cut openings (25 mm).

The system has been in operation since July 2022, and the installation was carried out by the Sonneberg-based company N.H. Industrietechnik. Since then, the fresh air reaches even angled work areas and is not impaired or diverted by machine exhaust air. The installers from N.H. Industrietechnik were enthusiastic about the tool-free suspension system, as minor corrections can be made with simple hand movements despite the complex routing. The customer also benefits from the versatile Type 08 suspension system, as quick disassembly and reassembly is possible during future maintenance and cleaning. The required stabilization of the duct system for the exhaust air is provided by circumferential aluminum frames, that prevent the ducts from contracting. The Kirsch company is very satisfied with the result and would like to add a second set of the system, that could be used while the other one is being delivered for cleaning. An important factor is that the system is easy to wash, as the metalworking industry often works with oils and lubricants. 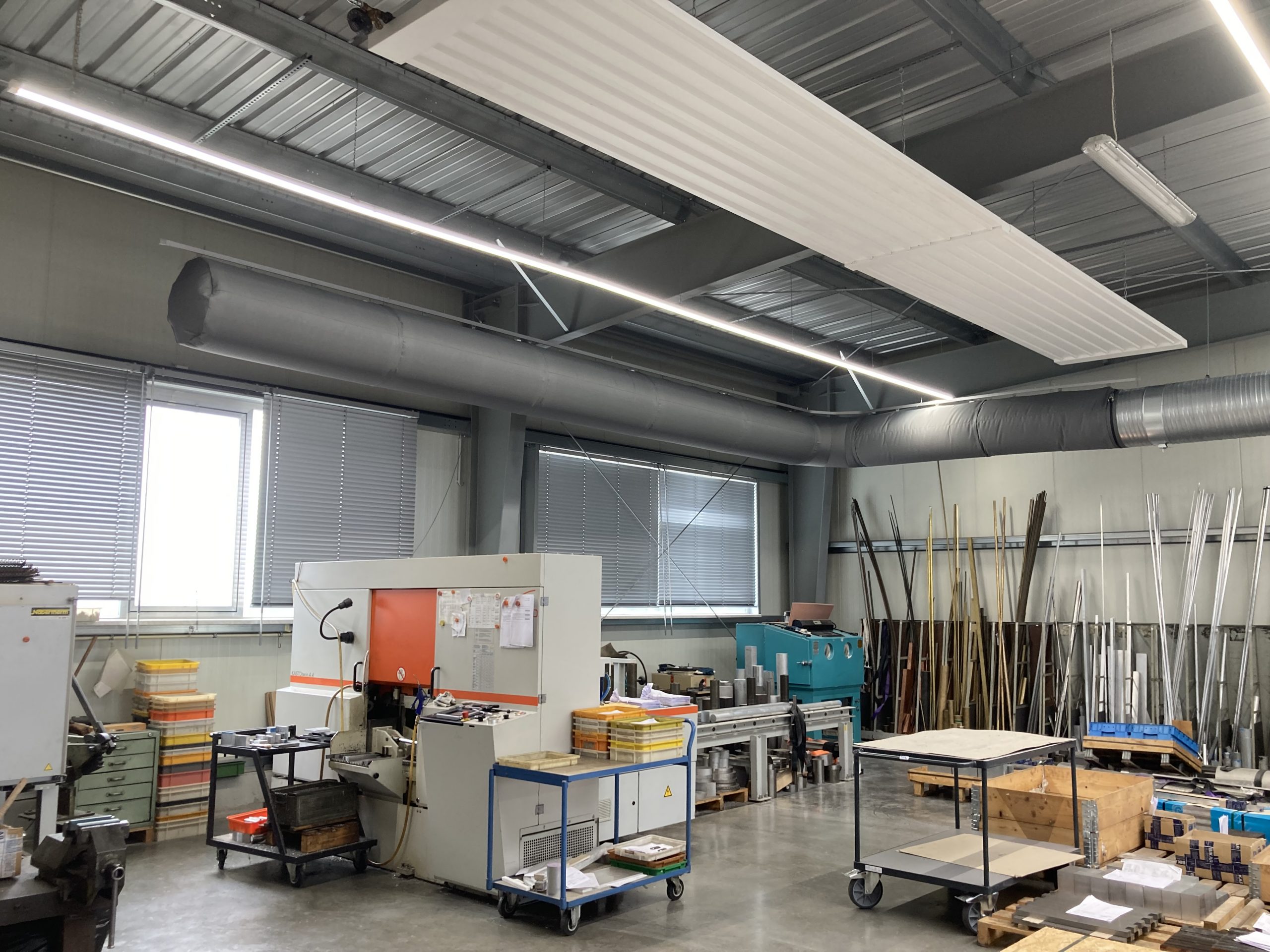 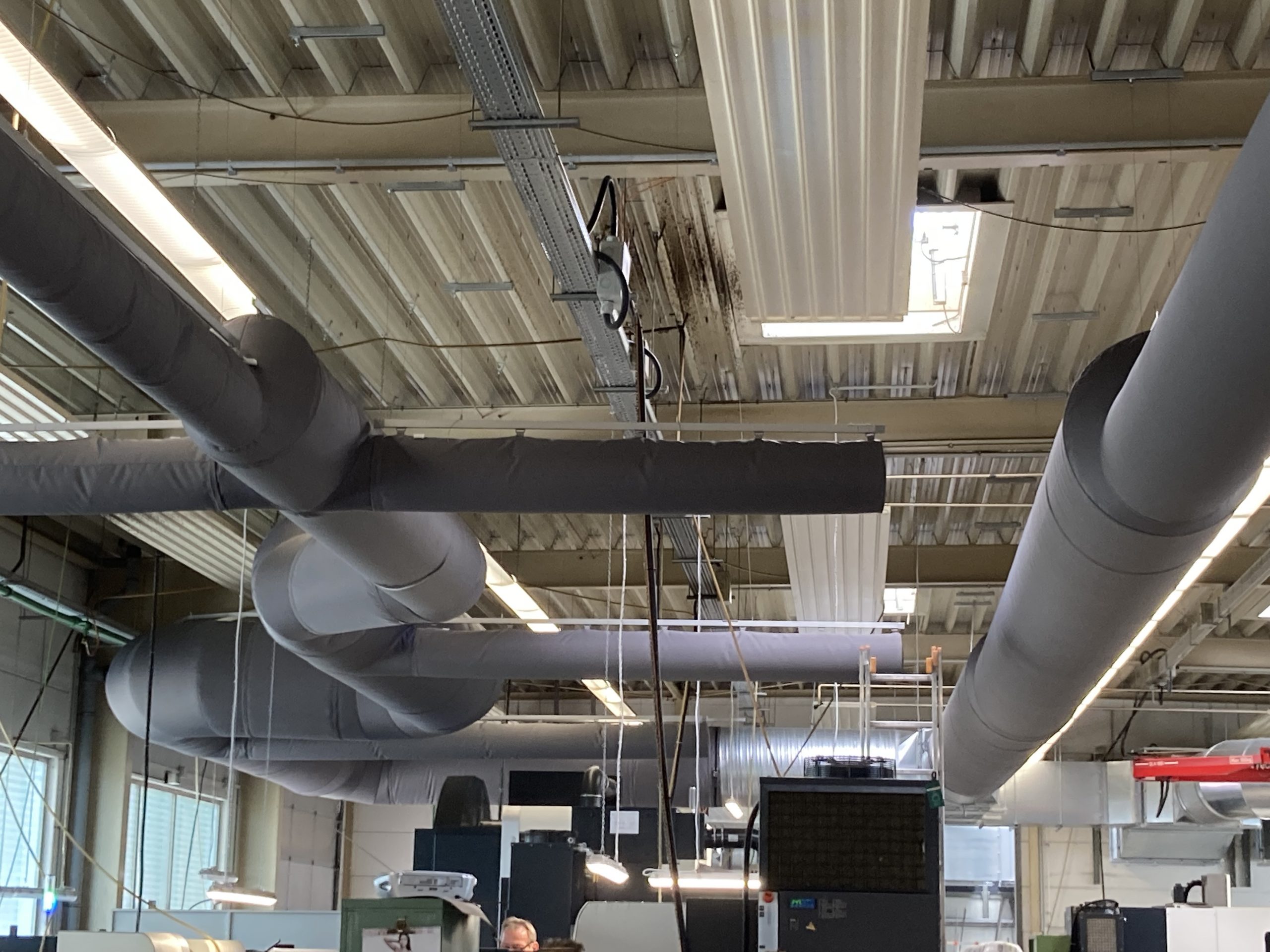 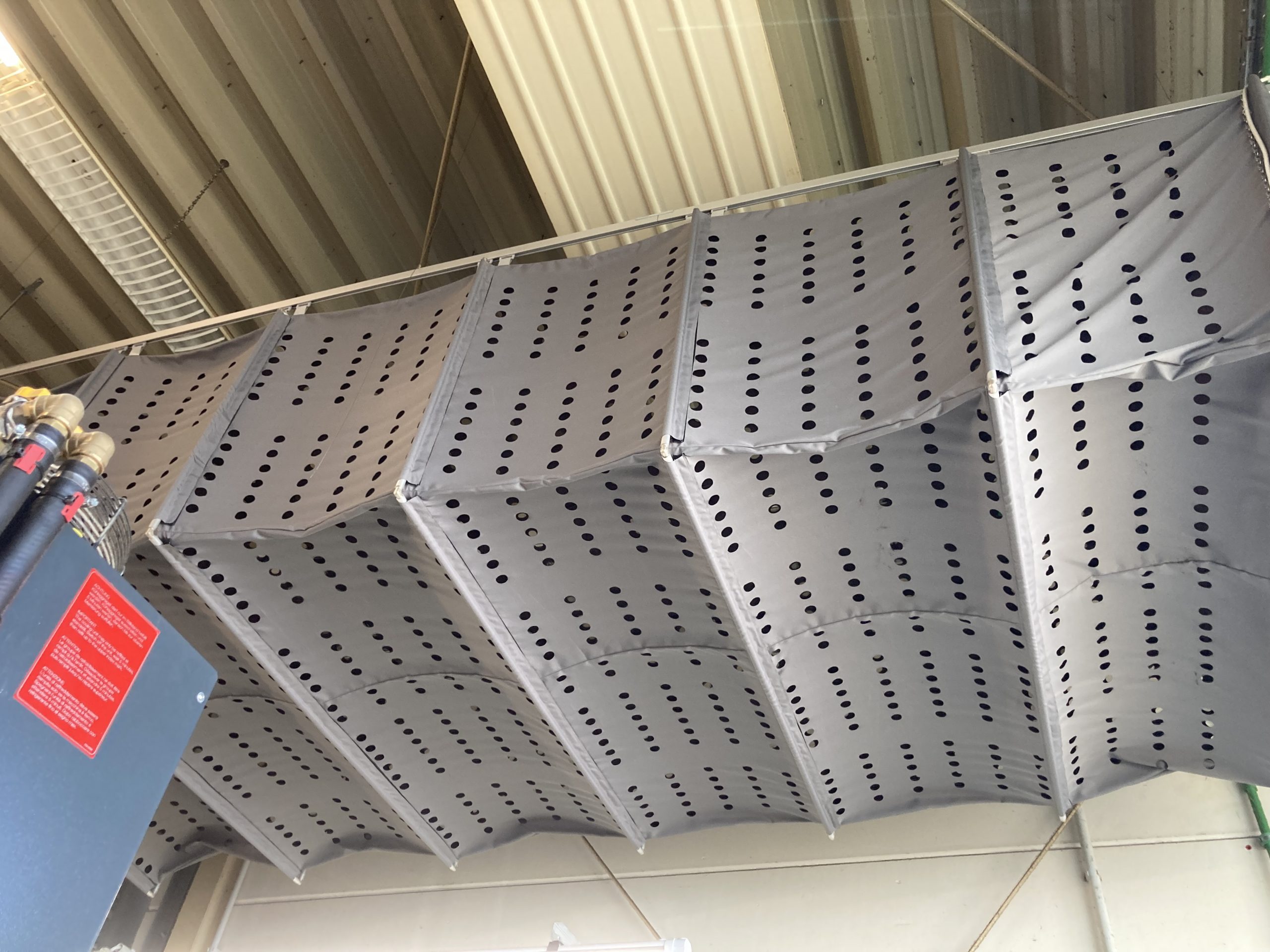 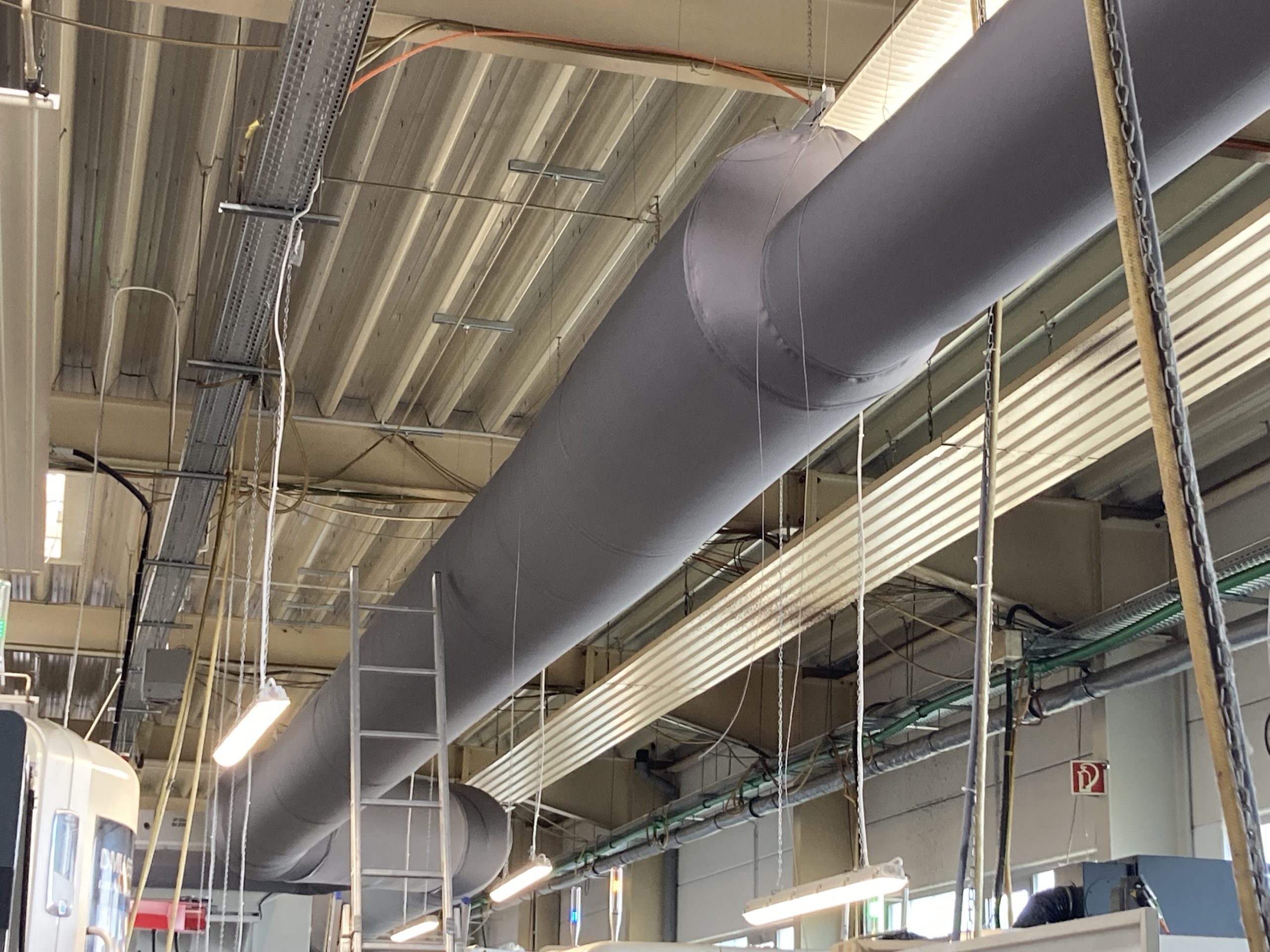 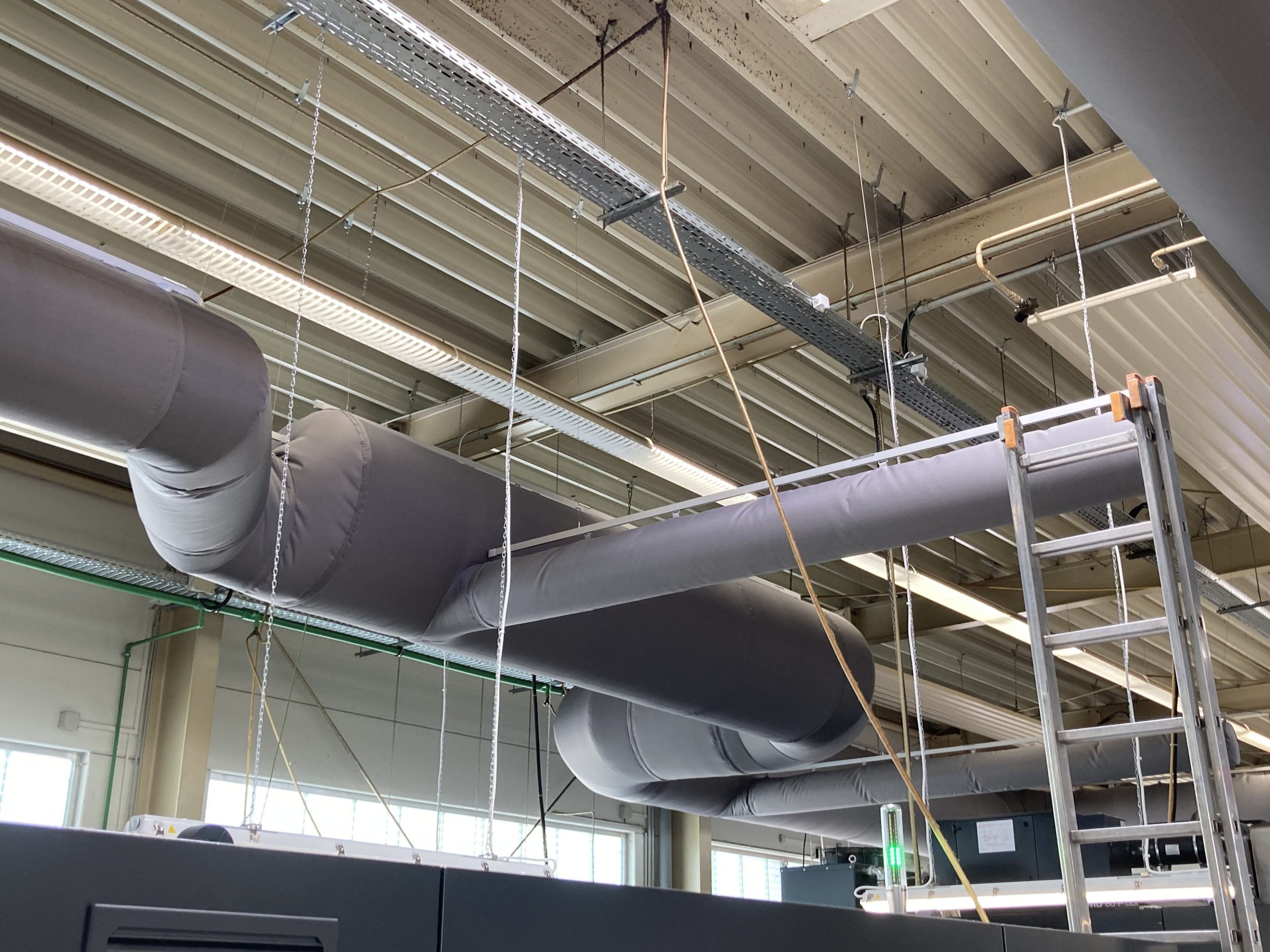